Nick Chopper, who followed in his father’s footsteps, made a living cutting down trees throughout the forests in the magical land of Oz. Once, his heart belonged to a beautiful Munchkin maiden named Nimmie Amee. They were both so in love that they planned to marry until the spiteful woman who Nimmie Amee served bribed the Wicked Witch of the West to put a horrible spell on the axe of the Munchkin maiden’s beloved woodman. Why would the old woman request such a terrible thing from the Wicked Witch? Because the miserly crone wanted to keep Nimmie Amee all to herself as a servant.

The Wicked Witch obliged the old woman’s bride and enchanted Nick Chopper’s axe to prevent the lovers from becoming betrothed. Nick’s axe, under the spell of the Wicked Witch, one by one chopped off his arms and legs. The tinsmith known as Ku-Klip replaced the woodman’s limbs with prosthetic ones made out of tin.

After the gruesome deed was finished, nothing remained of the poor woodman’s body. Nick Chopper was replaced entirely by tin except for one thing….. his heart. Ku-Klip failed to replace it. Once Nick’s body was completely made out of tin, he was no longer able to love Nimmie Amee.

As the story goes in The Wonderful Wizard of Oz written by L. Frank Baum, the tin woodman is befriended by a sweet, young girl named Dorothy and her little dog, Toto. She discovers him in the forest rusty and unable to move. With the use of his oil can she’s able to release him from his paralyzed state. Elated, the Tin Man follows Dorothy’s lead to the Emerald City so he can ask the Wizard for a new heart. Along their journey they are joined by two others, the Cowardly Lion and The Scarecrow.

Upon their arrival to the Emerald City, the Wizard sends the four travelers to Winkie Country where the Wicked Witch of the West lives and kill her. The Tin Man’s axe becomes quite useful during their quest, not only for chopping wood to build bridges or rafts when needed, but the enchanted blade proves worthy for cutting off the heads of animals that try to harm the Tin Man and his friends.

The Wicked Witch sends her dreaded winged monkeys to attack them. Then they grab the Tin Man and from high above, the evil monkeys purposely drop him causing his landing to be brutally damaging to his body. After the fight was over, Dorothy and the others are able to bring on the Wicked Witch’s demise. That’s when the Winkie Country’s tinsmiths are able to repair our beloved Tin Man.

As fans of this classic tale know that the Cowardly Lion was able to get his courage from the Wizard “Only during the aftereffects of the Wizard’s gift, when he is under the influence of an unknown liquid substance that the Wizard orders him to drink (perhaps gin) is he not filled with fear.” ~ https://en.wikipedia.org/wiki/Cowardly_Lion

… and the Scarecrow “In reality, he is only two days old and merely ignorant. Throughout the course of the novel, he demonstrates that he already has the brains he seeks and is later recognized as “the wisest man in all of Oz,” although he continues to credit the Wizard for them. He is, however, wise enough to know his own limitations and all too happy to hand the rulership of Oz, passed to him by the Wizard, to Princess Ozma, to become one of her trusted advisors, though he typically spends more time playing games than advising.” ~ https://en.wikipedia.org/wiki/Scarecrow_(Oz)

… and Dorothy wanted to go back home to her Auntie Em and Uncle Henry.

The Tin Man wanted a heart, but the Wizard, not being as powerful as he originally portrayed, was only able to give the Tin Man a placebo heart created from a silk pouch that was filled with sawdust. Believe it or not, this satisfied the Tin Man, who actually was the kindest of Dorothy’s friends.

After Dorothy returned home to Kansas, the Tin Man went to Winkie Country where he became the emperor. As time went by, he had his subjects build his palace completely out of tin, even the flowers in the garden were made from the shiny material.

So, a bizarre tale for a man who only wanted to marry his true love. Throughout my life I’ve always been such a fan of The Wizard of Oz, but honestly did not know of the extremity of how the woodman became our beloved Tin Man. “Wow!” Is all I can say…. 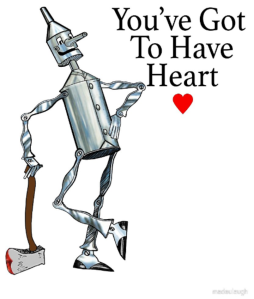