I was a small child, just barely school age when I had my first experience with the paranormal. I’ve never spoken publicly about it until now, not even at my public speaking events nor book signings have I ever brought up the incident of which I’m about to tell you. Yes, I’ve openly discussed my encounters with shadow people, being touched by spirits, my ability of being an empath and also my ability of angelic communication, but never openly discussed my first recollection of a paranormal encounter. Why? Because to many people, it may sound a bit macabre and strange.

Like I said earlier, I was a small child when it happened. A little girl all dressed up in Sunday clothes right after church services were over. The day was sunny and warm, and the church members were carrying on lighthearted conversations as they were walking out of the building. As my family conversed, my attention was oddly drawn towards the cemetery for no apparent reason, which was only a few feet away. This church was a small, country one with not a very big congregation at all. So the atmosphere was safe and there was no cause for concern as I walked towards the graves. The ground had been undisturbed for quite sometime, meaning that there had been no recent funerals to speak about. Yet, I was undeniably drawn to a particular grave for which I had no connection with. The deceased wasn’t a family member, nor a friend. In fact, the individual had been dead for many years prior to our joining the church. But as I neared the grave, I began to detect a very faint smell. It was one that I had never experienced before, quite fragrant and soft. The inviting smell drew me even closer to the peaceful plot.

Now keep in mind that no one followed me and that everyone from the church were several feet away, meaning that the scent from their perfume/cologne dissipated as I walked away from them. However, this new scent grew stronger as I approached the grave. It was so beautiful and intriguing that it made me want to investigate its origin. The headstone was void of any floral arrangements that would give plausible cause for the unexplained smell. So, I continued to let my nose lead the way which made me only inches above the ground. At this point, I was literally sniffing the Earth that was immediately below my nose. Only grass separated me from the dirt. Yet, this inconceivable fragrance had become even stronger. In my innocent mind I started seeing brief images of bones, like I was looking down into the grave below. Was I led to this spot by the deceased individual? Perhaps what I was smelling was the beautiful fragrance they wore when they were alive. Maybe the spirit of the deceased noticed my gift and wanted to connect with me.

I wanted so badly to take my little fingers and dig into the dirt so I could find out more, but was abruptly stopped upon my grandmother’s discovery. And ever since then, every time I see bones, I’m quickly reminded of the beautiful fragrance I’ve never experienced again. The incident still remains a mystery to me, a fascination that I will never forget. 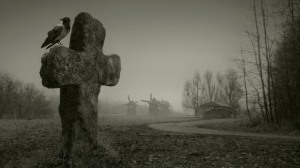 30 thoughts on “My First Paranormal Experience”