“Here come the men in black, the galaxy defenders……” ok, no worries, I’m not going to start singing the song. I’m sure Will Smith wouldn’t approve and luckily for you, by reading this, you’re not tortured by hearing my unmelodious voice. 😉 And I’m not here to talk about the hit film starring the very talented Will Smith and Tommy Lee Jones. However, I am a huge fan of their movies!

BUT……. I am talking about the supposedly real-life individuals known as the “Men In Black” (MIBs). Just like the Hollywood portrayals, these non-fictitious characters primarily wear black suits, white button-up shirts and black ties. They are reportedly some sort of secret organization that has been obviously denied by certain officials. It’s been said that the mysterious Men In Black appear anytime UFO sightings have been experienced. Why? Possible cover-up involvement? To insure that UFO witnesses remain quiet about what they have seen? By intimidating and threatening those who dare to speak publicly about any sort of UFO interactions?

Throughout recent decades, many supporters/investigators of ufology have supposedly been harassed and some have even died by mysterious causes. Are the MIBs to blame for all of this misfortune? Who knows?? It’s also alleged that the Men In Black have taped and recorded UFO hunters’ phones.

I personally have never experienced anything like this nor have I seen an alien or UFO (Unidentified Flying Object) of any kind. I’ve only witnessed shadow people, clairaudient experiences, touched by spirits and other paranormal encounters similar to those, but never aliens. I do know people who have claimed to have seen visitors from other planets, but none of them have ever told me about any visitors from the “Men In Black”.

So, do these well-dressed individuals actually exist or….??? I wouldn’t wanna find out……. 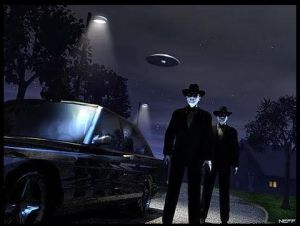 8 thoughts on “Men In Black”