Have you ever had a moment when you’ve bumped into someone that you haven’t seen in a while and they are so happy to see you, but you haven’t the slightest clue as to who they are? Or you go to a place that you’ve been to many times before, but you can’t seem to remember it? This happens to us all, especially to me (LOL), it seems like it happens to me more times than not!

When this happens to someone, they have just experienced “jamais vu”. And what the heck is jamais vu, you may ask? Well, according to Wikipedia “In psychology, jamais vu (/ˈʒæmeɪ ˈvuː/; French pronunciation: ​[ʒa.mɛ.vy]), a French borrowing meaning “never seen”, refers to the phenomenon of experiencing a situation that one recognizes in some fashion, but nonetheless seems very unfamiliar.” Strangely, it’s the opposite of “deja vu” which is the phenomenon that basically describes the feeling one gets when they’re experiencing a current situation even though they know that it has never happened to them before. Back in June of 2015, I wrote an article titled just that, “Deja vu” about its meaning and a couple of my very own deja vu moments.

And just for kicks…. here’s another “vu” that everyone’s well aware of, simply because it happens to us all. Ever have that moment when something is on the tip of your tongue, but you can’t, to save your own life, remember what it is? Like when someone starts to hum a song that you haven’t heard in a really long time and you know the name of the song, but you can’t quite get it out. Or when a couple of friends start talking about an old televisions series with what’s her name…. ya know the one… that actress that’s been on t.v. for years, but for some weird reason we just can’t remember her name at the moment….. Experiences like this happen to each and every single one of us. This phenomenon, my friends, is known as “presque vu”.

Anywho… just a little quirkiness for a “Fun Fact Friday”! Hope you have a blessed weekend!! Massive love to you all!!! ❤ 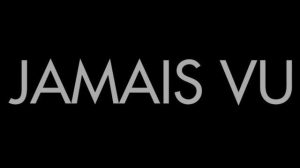 1 thought on “Jamais Vu: A Random Peculiarity of Familiarity”