Can you tell us a little about yourself?

I was born in Brooklyn, New York and grew up going to a Catholic school. My mother was a theater director in the local parish. One of the first films that caught my attention when I was very young was a film by an Australian director Nicolas Roeg titled “Walkabout”. Roeg was a Cinematographer on such films like “Fahrehheit 451”, Second Unit on “Lawrence of Arabia” just to name a few. So his attention to detail as far as composition and light was something that caught my attention for some reason.
My family moved to Ithaca and while I attended high school I became interested in drama and started acting. I wanted to direct so I approached the school and a sports booster club to produce the play “One Flew Over the Cuckoo’s Nest”. I produced it, directed it and played the leading role of R. P. McMurphy. The play was a success for the sports booster club and I knew exactly what I wanted to do. I was then approached by my high school English teacher to apply to the American Academy of Dramatic Arts in New York City. I then waited for word, and was finally accepted.
After completing my studies there I left for California and took a job as a bartender. There is a longer story, but it would end up being a book!

What are some of your on-screen accomplishments?

As far as acting goes, my first on-screen appearance was being a biker on a film titled “Savage Dawn”, that film starred Lance Henrickson, who I met years later and we talked about that picture, he said not to remind him as it was the worst picture he was ever on. I would tend to agree. I then had a small role in the film “Iron Eagle” starring Lou Gossett Jr. and Jason Gedrick. From there I was in an episode of a television series called “Downtown” and then appeared in a TV Movie “A Different Affair”. My next acting job I landed was in a film titled “The Danger Zone”, I was the 1st Assistant Director on that film and drove to work on my motorcycle. At the time I had long hair and looked like a biker, the film just happened to be a biker film and they asked me to play a role in it. I did a small scene for the same company in a film called Vampire at Midnight. (I’m rushing through this!). I then went to Mexico on a film titled “The Taking of Beverly Hills”. I played Griff in my own film “The Art of a Bullet”, had a small scene in “Vanilla Sky” and “Jerry Maguire”, had a cameo in “Mission: Impossible 3”.

What got you into the film industry? What was the spark that ignited it all for you?

Kevin Elders, the writer of “Iron Eagle” and I became friends while I was bartending. We discussed the possibilities of me getting out from behind the bar and Kevin made me a promise that he would make that happen. Just before his picture was picked up by Tri-Star, he pulled me out of the bar and landed me a job on a movie being Sylvester Stallone’s assistant on Rocky 4.

Your newest film is titled, Hush. Can you share its chilling synopsis?

The short film “HUSH” is a scene taken from a feature script I wrote that is an Untitled Horror Script. It takes place one night while a young college student is baby sitting her professor’s daughter. A storm front has moved in and the power to the house goes dark. When the little girl calls for the baby sitter to come upstairs, the baby sitter is in for a night of terror.

What inspired you to create this film? Was it based on imagination or actual events?

I had written a horror script just prior to the Untitled Horror and my producing partner had to go on location which put the film on hold. So, instead of sitting and waiting, I wrote a story that combined some elements of events that occurred in upstate New York while I was growing up. I had heard about a story of a house in a small town not far from where I was from where a woman who had committed suicide was haunting a condemned house. When I was 17, I went to the house with several friends and I remember entering the house with a great feeling of fear. That moment stayed with me and helped in the writing of the script. I’ve always been interested in the afterlife. My first short film titled “SECOND DANCE” was about suicide, I had several people close to me die in one year, one of them from suicide. I wondered what was happening before they crossed through that threshold? What was on the other side? Can we reach those that passed on? What if they were angry when they passed? These are questions I continually think about and maybe this was part of the inspiration. I remember a time when I was in Ireland with my mother, brother and sisters. We stayed in a town in Donegal called Moville. There was an Inn called New Park. We checked in for 3 weeks. On the first night my mother heard someone coming up the stairwell outside our door thinking it was odd that they were arriving at a country Inn at midnight. So the next morning at breakfast my mother asked the woman who was the Inn keeper about the people coming in so late at night. The woman brushed it off and said “No one is here but you and your children”. My mother then asked if she was walking up the stairs at midnight and the woman replied that her and her family stayed in the cottage a little ways down the path from the Inn. This interested my mother, she was always talking about spirits and the dead.
So, the next night when my mother heard someone walking she asked me to go out in the hallway to look. I had no idea what would be out there and I didn’t think there were any spirits or ghosts that would be out there. Besides, I was a tough kid from Brooklyn and no ghost was going to frighten me. Well when my mother asked me to go out in the hall, my brother closed the door leaving me in the dark. The tough kid was no longer tough and I began banging on the door.
We then heard that the home was Field Marshall Montgomery’s home that he bought for his mother before he left to fight the Nazis in World War 2. Apparently, they got into an argument before he left. She later died never coming to terms with her son and now walks the stairwell at night waiting for him to return. This was a story we heard from a number of old timers in the town. This also inspired me.

Hush has been receiving very impressive reviews. What are some of the exciting things that people are saying?

We’ve received 29 awards and all the reviews have been positive. On one particular screening I noticed a man who when standing was about 6’ 6” and when he sat down he looked like he was 5’8” same height as me! At a certain part of the short film there is a moment that shocks people and this guy leaped out of his seat screaming. I had to meet him in the lobby and record him. I still have the moment on my phone where he explained how the film made him jump out of his seat! Others have followed us from festival to festival wanting to know more about the feature film. I receive emails and posts that are always positive about the film. I was extremely nervous releasing the short film always thinking that I could do better. But the fans of the film have been so kind and supportive. I have a friend that I went to grade school with that I have not seen in years told me her 15 year old daughter loves the short film and wants to visit the set of the feature. She has already said that she is willing to travel to see the short at any festival. Lucky for her it is playing near her in Philadelphia in October at the First Glance Film Festival. These moments keep the fire burning for me. This is who I want to make films for. I want to avoid the blood and guts and get into the real terror of what is behind the door????

Where can people find the movie trailer for Hush?

The trailer for HUSH at the current time is at hushthefilm.com
As I mentioned the title for the feature will be different as another company has a film in production already titled Hush. So if people stay in contact and follow me on Twitter I will keep everyone informed as to the new title that we are working on. My Twitter handle is @MikeyKehoe
We are working diligently on the preproduction of the film and can’t wait to scare the S#!& out of everyone!!!

And for all of us movie goers who want to see Hush, tell us where we can find it?

On November 11th I will be releasing the full short film of HUSH on YouTube and will be announcing it on my Twitter account. I am holding off because we are still in a number of Festivals around the world.
Such as:
First Glance Film Festival – Philadelphia, PA
Catalina Film Festival – Catalina Island, CA
Celluloid Screams Horror Film Festial – Sheffield, England
I Filmmaker International Film Fest – Marbella, Malaga Spain
Ithaca International Fantastic Film Fest – Ithaca, NY

What’s next for Michael Kehoe?

We begin principal photography on the feature film that the short film Hush was taken from. But please know that when you see a feature film titled “HUSH” it may not be ours. So, once again @MikeyKehoe on Twitter will have all the information.

Any positive words of advice for your fans?

I would love to thank all the fans that have cheered us on throughout the festival journey. And for the future filmmakers I would say “Dream Until Your Dream Comes True”. “Never Give Up”. Someone gave me a chance and I always believe in paying it forward. I hope to share a number of films with those that love cinema. If I am at any of the festivals or screenings, I would be more than happy to share some moments and talk with those who are following my work. Thank you for this opportunity to share these words with everyone. I hope I can entertain you all in the time to come. I hope we can do more of this and keep everyone informed as to the progress of the films to come. Please keep an eye out for our feature as I mentioned we will update everyone on Twitter. 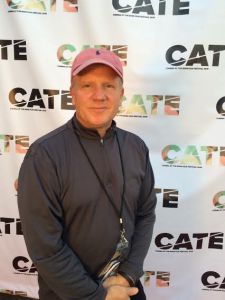 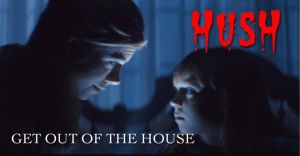 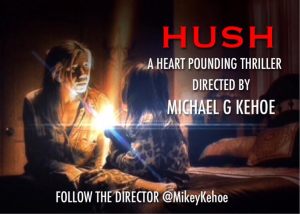 I’ve actually had the privilege to watch the entire short film titled, Hush. The following is my review.

Hush is a respected adaptation of supernatural events that delve deep into the human psyche. The film’s production is tastefully done and is void of any unnecessary vulgarity and unwanted nudity. The performances are well executed and believable, all the more reason to send chills directly to the bone. With its terrifying atmosphere and shockingly dark storyline, it easily leaves the viewer wanting more. Fortunately for us movie goers, this phenomenal short film has been created from the script of the feature film that will go into production under another title. Certainly exciting news!

Hush recieves a definite 5 stars from me! ~ Sheila Renee Parker